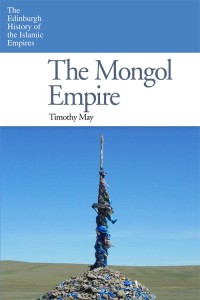 The Mongol Empire by Timothy May.

A comprehensive survey of the Mongol Empire – the largest contiguous empire in history
As the largest contiguous empire in history, the Mongol Empire looms large in history: it permanently changed the map of Eurasia as well as how the world was viewed. As the empire expanded, the Mongols were alternately seen as liberators, destroyers, and harbingers of apocalyptic doom. At the same time, they ushered in an era of religious tolerance and cross-cultural transmission.

This book explores the rise and establishment of the Mongol Empire under Chinggis Khan, as well as its expansion and evolution under his successors. It also examines the successor states (Ilkhanate, Chaghatayid Khanate, the Jochid Ulus (Golden Horde), and the Yuan Empire) from the dissolution of the empire in 1260 to the end of each state. They are compared in order to reveal how the empire functioned not only at the imperial level but how regional differences manifested.