A New Book: How Mongolia Matters: War, Law, and Society 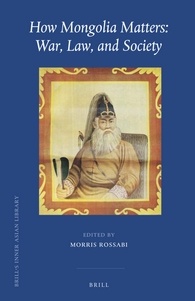 How Mongolia Matters: War, Law, and Society. Ed. Morris Rossabi.
The essays in this volume dispel some of the myths concerning the Mongolians and other Inner Asian peoples. This remarkable volume edited by and dedicated to Morris Rossabi challenges the depictions of these mostly nomadic pastoral groups as barbaric plunderers and killers while not denying the destruction and loss of life they engendered. Several essays pioneer in consulting Mongolian and other Inner Asian rather than exclusively Chinese and Persian sources, offering new and different perspectives. Such research reveals the divisions among the Mongolians, which weakened them and led to the collapse of their Empire.
Two essays dispel myths about modern Mongolia and reveal the country’s significance, even in an era of superpowers, two of which surround it.
Contributors are: Christopher Atwood, Bettine Birge, Michael Brose, Pamela Crossley, Johan Elverskog, Jargalsaikhan Enkhsaikhan, Yuki Konagaya, James Millward, David Morgan, and David Robinson.